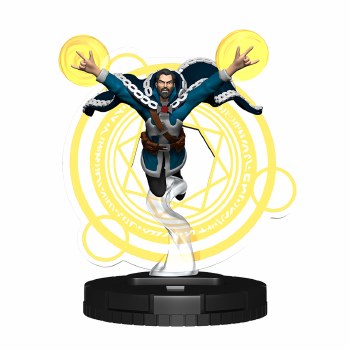 This set includes a full regular set of Common, Uncommon, Rare and Super Rare, Prime and Chase figures. (LEs, and variants (if any) are not included). That's 68 figures plus the 4 Primes and 6 Chases.

This 5-figure booster release features many fan-favorite sub-themes like the Avengers, Thunderbolts, S.H.I.E.L.D., Stark Industries, and the Masters of Evil, as well as the return of ClixFX bases included with Chase figures and Shifting Focus featuring Iron Man. Marvel fans who aren't reading comics every week are still going to recognize and enjoy this set since it features lots of characters they'll recognize from the MCU, like Nick Fury, Maria Hill, Iron Man, Thor, Hulk, Happy Hogan, Ghost, Hawkeye, Pepper Potts, Ultron, and more!

Existing and new HeroClix fans will look forward to new figures to power-up their collection in addition to never-before-Clixed characters like Singularity, Roz Solomon, Jolt, Azzuri, Arno Stark, Blackheath, Robbie Reyes, and more! Find new versions of beloved characters like the Immortal Hulk, Punisher War Machine, Earth X Thor, and some characters we haven't seen in HeroClix in a while like Blade and Citizen V!

This set does not include the Ultra Chase, but if you purchase this set, you will have the opportunity to buy it if we get one. They will be offered in the order of payments received.