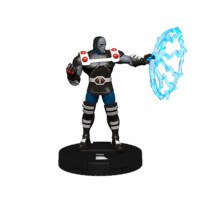 This presale item is due to release April 8.

This set will also include 10 random Team Up cards. They are predicted to be available at a rate of 3 per brick, with too many different ones for us to be able to presell full sets or specific characters of Team Up cards.

This set includes a set of Common, Uncommon, Rare and Super Rare figures. (Primes, Chases, LEs, and variants (if any) are not included). That's 68 figures!