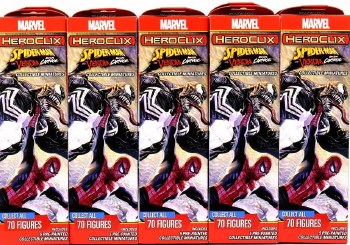 WizKids will launch the Marvel HeroClix: Spider-Man and Venom Absolute Carnage set in August, in both boosters and Fast Forces sets, along with a Dice and Token Pack and Release Day OP Kit.

Spider-Man and Venom join forces in the Absolute Carnage set, which features popular characters from the Spider-Man comics, including Spider-Man, Green Goblin, and Mysterio, as well as Venomized versions of iconic Marvel characters like Captain Marvel and Doctor Strange. Characters that are new to the HeroClix game will also appear, including Knull, Scream, White Rabbit, Spider-Man 1776, Spider-Pharaoh, and Leonardo da Venom.