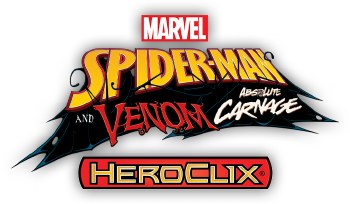 This is a complete heroclix Common, Uncommon, Rare, Super Rare SR, Prime, Chase (8 of them this time), Fast Forces, Dice & Token base set of Spider-Man and Venom Absolute Carnage Heroclix. You will get one of each. LE figures are not included in this auction.

Figures that include an object will have the object included in this auction.

Spider-Man and Venom join forces in the Absolute Carnage set, which features popular characters from the Spider-Man comics, including Spider-Man, Green Goblin, and Mysterio, as well as Venomized versions of iconic Marvel characters like Captain Marvel and Doctor Strange. Characters that are new to the HeroClix game will also appear, including Knull, Scream, White Rabbit, Spider-Man 1776, Spider-Pharaoh, and Leonardo da Venom.