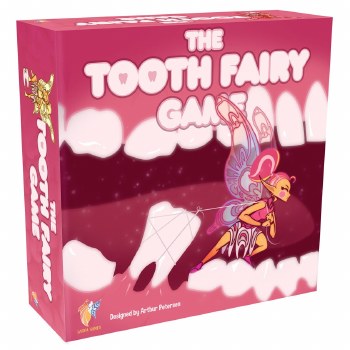 The Tooth Fairy Game by Arthur Petersen and Larva Games is recommended for 2 to 5 players ages 6 to adult and the games play in between 15 to 30 minutes.

While all games are good for ages 6 and up, each game is a bit more difficult than the one before it:

That’s My Tooth is the "Baby Teeth" game.

After you’ve had fun playing that game a few times, you can try out Pulling Teeth, the "Adult Teeth" game.

Then there is Lie Through Your Teeth which is a game for those with "Fake Teeth." That game works best for those who know how to bluff. It is a clever take on the classic "liar’s dice" game.

Finally, there is Treasure Teeth for those rich tooth fairies with "Gold Teeth." In Treasure Teeth you bid on valuable teeth, trying to get the most money. However, your bid is secretly split up any way you choose between your two hands. But beware, another player will pick WHICH of your two hands will be your real bid! Will you put all your teeth in one hand, hoping they pick that one, divide them evenly, or do you have another ingenious plan in mind?

Celebrate your child's next loose tooth with a game of Tooth Fairy!